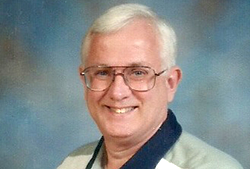 "I wanted to be a teacher since I was in second grade," said Adams. "When I was in ninth grade, I found out one of my brothers was mentally handicapped, so I switched to special education. He kind of drove me in that direction."

Adams enrolled in Illinois State, where he dove right into the education programming, though he decided to take a slight detour before immediately studying special education.

After graduating from Illinois State, Adams took a job in his home district in Rock Island. He spent two years as a self-contained educable mentally handicapped teacher and piloted the cross-categorical model (EMH, LD and BD) to meet the needs of students from funding provided from the Illinois State Board of Education. Adams also worked on his master's in special education, growing his knowledge to match the increasing responsibilities given to him by the school district.

Adams hunger for learning didn't end with his master's. After accumulating so many hours past his master's, he enrolled in Illinois State's Ed.D. program. Despite the demanding nature of the program, Adams still served as a leader in special education across Illinois through his work with the Illinois Education Association (IEA) where he sat on board of directors for six years. His work with the IEA led to Adams being appointed to several committees, including the State Advisory Council on the Education of Children with Disabilities. While on this committee Adams influenced the curriculum and culture of special education, even recommending a name change for the group.

Throughout his 33-year career, Adams served as case manager at his school as well as head of the special education department for Rock Island's junior high school and high school. He was also active within the teachers" union, in addition to the Higher Education Advisory Council.

"I discovered when I became a special education teacher that I needed an outlet or I would quickly become burned out," Adams said. "I found it fascinating to get involved in state policy and meet other people."

Adams retired from teaching in 2005 but still remains active in education. His work led to the Illinois Education Association to naming him Illinois Retired Teacher of Year for 2014. Drawing from his years of experience Adams encourages future teacher to be ready for anything.

"Be open to new possibilities and never assume that everything is going to be the way you want them to be," Adams said. "Particularly in special education you never know what's going to happen from day to day."

Adams has created a scholarship in the College of Education supported by a bequest that will ensure new teachers will be more than prepared to face the challenges of the classroom. He plans to increase the fund in the future.

"I benefitted a great deal by the programs there and wanted to give back," Adams said. "I've always been interested in giving back. I'm a child of the '60s, and we were very oriented from Kennedy on to get involved in the community and do what you can."